Food Is How I Say I Love You

Everyone from LA to NY is talking SoCal Mega-Drought and everything from pointing fingers at industries for using too much to not watering lawns or washing cars to what else we can do to conserve water so that we’re not waking up in a disaster movie 12-18 months from now where carrots and tomatoes cost $10lb (*if* you can find them), and several people have even asked me “if I feel badly about gardening during this shortage”… wait what?

Because while a garden takes water to grow, I never really thought about what my impact (or lack thereof) might be- I just really love gardening. BUT! I do not love people accusing me of being a part of a problem. No I don’t. I’m all about the solutions, yo.

​​So I decided to do the math on our personal home usage that includes a year-round, intensively farmed 800-1000sqft garden. A little background info on the chart below, just to put it in perspective: one hundred cubic feet (HCF) of water is 748 gallons, or just over 2,800 liters. 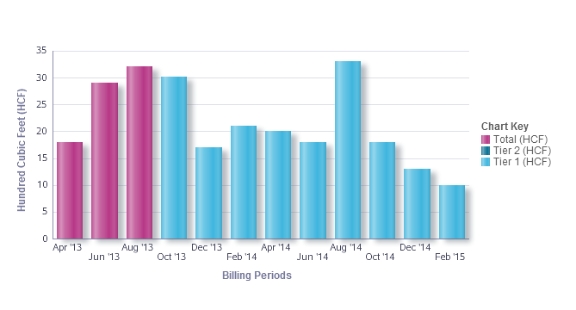 ​The above chart is from our water bill for a household of three adults, six chickens, and a hundred or so plants. According to LADWP, we use between 40-75 GALLONS per person, per day, on average low months (10-20HCF per 2 month billing period.) This blows my mind, because despite the fact that we fall into the “low use” Tier 1 category for more than half of the year, that still sounds like a pretty high number to me. I think we try to be conservative with our usage too (not terribly long showers, all dishes are hand-washed, also includes laundry usage in that estimate and drip irrigation for all gardens.) But we do still manage to fall into the lowest water use charts as illustrated below, and we never go thirsty or dirty. 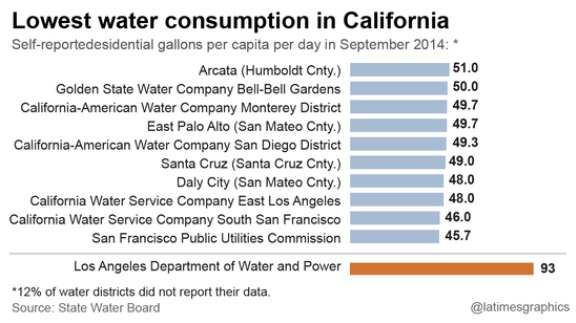 However, this usage number tends to double, even triple between June and October and climb upwards of 30HCF per two month period… but unlike the residents of some SoCal neighborhoods who use 150-500g PER PERSON PER DAY, our numbers don’t go up because we’re desperately trying to keep our swimming pools full and our lawns green: they go up because we’re keeping our food alive. ​

Based on the information that I could find, my math averages our water usage at around 7g/lb of produce grown (assuming I hit the summer average of around 2,000lbs) vs. the 15-20g/lb (or more!) required for equivalent commercial production. 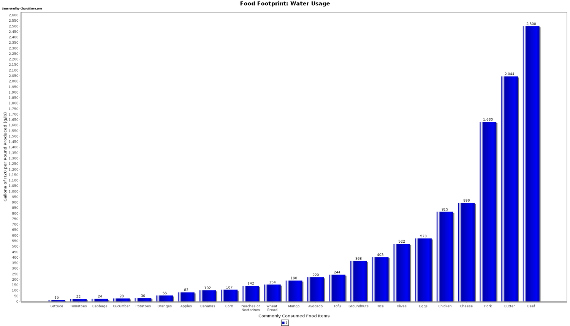 ​Our garden is set up with frequent compost amending between crops, very little mulch (due to insect issues- I “live mulch” by intensively planting crops instead), and is mostly dry farmed with drip irrigation maxed at .85gph for 30-45 minutes 3-5x per week on the hottest weeks of the year (above 95°.)

Also, I didn’t include eggs in this water figure, though the “immediate” (literal) water consumption numbers are negligible. On a side note (based on the chart above), HOW do commercial eggs require 573 GALLONS PER POUND? I’d imagine the majority of that number is because commercial eggs are raised on 100% grain diets, plus they require washing and pasteurization (though to be honest, I don’t even know if that 573 gallons includes the supply chain.)

​My six birds lay an average of 2 dozen eggs per week (around 2lbs of eggs), and go through no more than 7 gallons of drinking water per week, plus around 200 “water footprint gallons” of grain, or 30ish gallons per bird, assuming a 40lb bag of feed requires 4,000g of water to grow and lasts me 20-25 days, depending on forage available for them in the garden (though the grain I buy is grown in a place without drought issues, I still included it for the sake of this argument.)

With grain numbers in mind, egg production still “costs” close to 100g/lb, more than 10x what it takes for me to produce vegetables, sure. But it is also an average of 3.5g/lb in the immediate usage (“drinking water”) sense, or approximately half of what it takes me to produce vegetables. Additionally, my chickens also produce around 2lbs of compost per week, which I’m not even going to try to math into this whole conversation… let’s just say that poop is actually important here too, because it helps to amend our clay soil and keep our peak water usage a little bit lower and plants happier and healthier.

But where am I going with this?

Well… to take it back to the original question from various parties: “Don’t you feel bad, watering your garden in a drought?” Actually no. No, I do not. And not only for the water saving reasons above, but for several others. 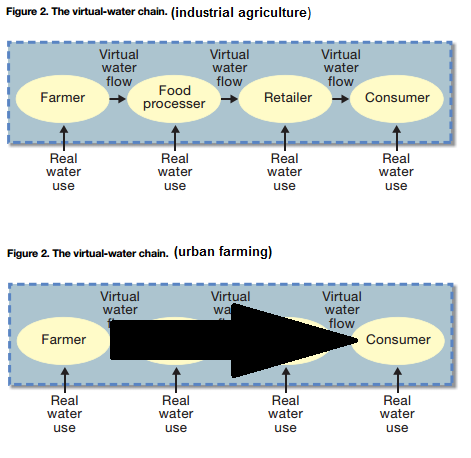 Most people have read by now that agriculture uses somewhere around 80% of California’s water supply. What most don’t realize is how much is not only used at the farm level for irrigation, but at all other stops along the supply chain. Washing and sorting, washing and processing, washing and wholesale repackaging, at every step of the supply chain. In sharp contrast, the produce that I grow in my backyard (maybe) gets washed ONCE.

Agriculture isn’t the only industry at fault, but it by far the biggest player in how much longer we have enough freshwater on the west coast. And while the idea of raising water prices and cutting agricultural field flooding could help buy us some time, political offices are notoriously slow and inept at creating proactive measures- even the reactive ones announced today won’t really be enough as they will take YEARS to execute.As our population steadily grows and water prices creep up (and food prices follow), we as urban communities can help offset our water footprints by doing the following:

This summer promises to be another scorcher, and as we creep into year four of this potentially decade long drought, we really only have two choices- to be proactive individuals who take matters into their own hands, or to “wait and see”. I know what camp I’m in… and it doesn’t require me giving up anything I truly love, just being more thoughtful about it! What other steps are you taking to be more water conscious these days?